Where Are They Now? Dick Mackey 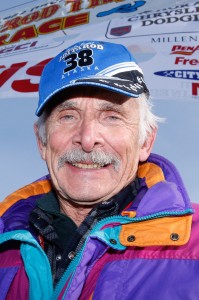 In 1978, after mushing 1000 miles across the remote Alaska wilderness, Dick Mackey won the most exciting victory in the history of the Iditarod, defeating defending champion Rick Swenson by one second.   A legendary race full of gamesmanship and intrigue, Mackey and Swenson had been dueling for hundreds of miles along with Emmitt Peters and the Anderson brothers, Eep and Babe.  In the end Mackey’s lead dogs crossed the burled arch first and Mackey collapsed exhausted on the ground.  Swenson immediately followed with his entire team passing under the finish line.  Confusion followed as to who was the actual winner but in the end, Mackey was declared the first to finish. That race helped cement the Iditarod on the world map and to this day stands as the most dramatic victory in the Iditarod’s 44-year history.

Mackey met Joe Redington Sr. at the Tudor Track in Anchorage and worked with Joe on preparing for the Centennial Race in 1968.  He and Joe became fast lifelong friends and worked together for many years to help form the foundation of what the Iditarod is today.  Mackey ran the Iditarod a total of eight times, finishing in the top 10 the first six times he ran.  Four of his sons have run the Iditarod, Rick, Bill, Lance, and Jason.  Rick won the Iditarod in 1983 and Lance became the only person to win the Iditarod in four consecutive years, 2007, 2008, 2009, and 2010, along with winning the Yukon Quest and Iditarod back to back twice.

During the years after the ’78 race, Dick helped to promote dog racing both in Alaska and all over the world.  He served as President of the Iditarod Trail Committee in 1979 and race manager for the Iditarod in 1981 and 1985.  Dick also served as the race marshal in Italy for the Trans Italia Race in 1992 and 1993, race marshal of the Pirena Stage Stop Race in Spain in 1988 and 1989, and race marshal, representing the West, of the East Meets West Race on the river separating Norway from Russia in Norway in 1994.   Mackey signed a five-year contract to be race marshal of the Upper Peninsula Race in Michigan in 1995.  In the early 1990’s, Dick was asked to provide dogs and be a technical advisor for the movie, White Fang.  In addition, Dick also did race commentary for Channel 13 for several years until he “tired of being away from the action” at the start line of Iditarod.

Mackey, with his wife Kathy and three kids, moved from New Hampshire to Alaska in 1959.  In the winter of 1960, he watched the Fur Rendezvous races where he got his first taste of dog mushing.   Who would have thought at that time that he would go on 18 years later to become the Iditarod champion?  His first interest in mushing came when his oldest son, Rick, then age 6 wanted a dog.  In 1965 Mackey ran his first Fur Rendezvous race.

In 1981, Dick and Kathy moved to Coldfoot, halfway from Fairbanks to Prudhoe Bay on the Haul Road and established a truck stop there. He held the Coldfoot Classic Sled Dog Race in 1983, 1984, 1985, 1986, and 1988.  He officially retired for health reasons and sold Coldfoot in 1990 and says he’s been enjoying life ever since.  Dick and Kathy spent the next two years traveling around the country, Dick reflects, “always to places where it was warm.”  They ended up in Branson, Missouri in May of 1991 and stayed until June of 1992 in order for their daughter to finish high school.  The day after her graduation, they left Branson and headed back to Alaska building a house in Nenana.  For a couple of years, he and Kathy enjoyed RVing in their motorhome around the US and Canada.  They brought several caravans to Alaska during the summers of 1994, 1995, and 1996. After three of these tours, they decided that leading caravans was not what they wanted to do the rest of their life.

For the past 10 years, he and Kathy have enjoyed spending 4 ½ months in the winter at their home in Arizona and the summers in Alaska.  When he can, he still enjoys being in Alaska for the Iditarod to support his sons who are running.  They now reside at their home in Willow, which they purchased in 2010.

The last line from Dick Mackey’s book says it all. “I’ve had a great life in Alaska, but I have to say that the one second at the finish line in the 1978 Iditarod was perhaps the most important second of my life.” 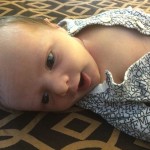 By Joanne Potts, Assistant to the Race Director

Breaking News:    Grandpa Dick Mackey and the entire Mackey clan would like to enthusiastically announce the birth of Atigun Shepherd Creek Mackey who was born in Fairbanks on June 29, 2016, to Jenne Smith and Lance Mackey.  He weighed 7 lb 2 oz and was 18 inches long.  Welcome to the world, Atigun.

An autographed bib signed by Joe Redington, Sr. is up for auction!  Bid and win this historic Iditarod artifact.  Click here to view and bid! 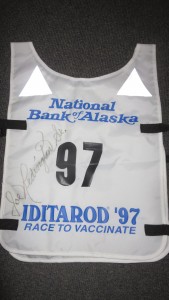