Eye on the Trail: Tribute to Huslia Hustler, George Attla

Is it coincidence or divine intervention that sends Iditarod through the village of Huslia this year?  Huslia is the home of recently deceased George Attla Jr.  Attla was a legendary sprint musher and an inspiring person who gave much to his family, community and young mushers.   Long distance wasn’t really his passion but George is an Iditarod veteran after being one of the very first mushers to sign up for the 1973 inaugural race to Nome.  Attla crossed the finish line in fourth place, being on the trail for 21 days 8 hours and 47 minutes.  The purse he earned was $4,000.

George was born in 1933.  His family lived a subsistence life style moving from camp to camp as food was available for harvest – fish, caribou, berries, etc.  At the young age of eight, the usually energetic young boy who faithfully helped his father on the trap line began experiencing severe leg pain.  The diagnosis wasn’t good news and separated George from his family for the next nine years.  It was tuberculosis.  George was sent hundreds of miles away from home to the hospital in Sitka.  The disease attacked George’s right knee.  Before he was released from the hospital at the age of 17, his knee was fused.  Attla’s exceptional work ethic kept him on his feet and active. 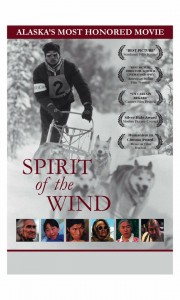 Video Production – Spirit of the Wind

When George returned home to the subsistence life style of his family, he was quite lost.  He’d spent more than half of his young life away from home.  He didn’t know who he was or how to fit in with his family or his village.  Attla admits that he was very bitter about the cards he’d been dealt in the game of life.  Through mushing Attla was able to redirect his anger in a positive direction.  Sled dogs became his passion and in the sport of mushing excellence became his standard.

Attla dominated the sport of sprint mushing.  His career stretched over five decades.  George won ten Fur Rendezvous Championships, eight North American World Championships and nine International Sled Dog Racing Unlimited Class medals.  He accomplished all of this with a stiff leg that would have sent lesser men to seeking pity and felling sorry for themselves.  In 2011, at the age of 78, the Huslia Hustler as George had become known, won the Koyukuk River Championship.

Over time the Huslia Hustler has generously shared his knowledge of mushing.  Attla authored a book called “Everything I Know about Training and Racing Sled Dogs.”  Joe Bifelt, Attla’s grand-nephew has been training as a sprint musher with George as his coach.   Bifelt was entered in the 2015 Fur Rondy in Anchorage, the first “big” race George entered.

Joe films his runs with the Attla dogs using a Go-Pro.  When the run is over and the dogs are cared for, George’s student downloads the video to computer.  Athlete and coach go to work analyzing the footage.  For Bifelt, Attla was an armchair mushing coach.  George didn’t just tell Joe what to do, they discussion advantages and disadvantages of a particular change or strategy.  Seems he was the best so to teacher.

Beth Bragg author of a story for the February 11, 2015 edition of the Alaska Dispatch says this about the Huslia Hustler, “Few people know dogs better than Attla, an Athabascan who has been described as the Picasso of mushing.  He was a dog whisperer before the phrase was coined.  The late Great Iditarod champion Susan Butcher told others that George has forgotten more about mushing than most people have learned.”

When Attla turned to racing, he used dogs trained by other outstanding Huslia mushers.  After competing locally, he decided to pit his luck and skill against mushers in the larger arena of Anchorage.  During the 1958 Fur Rondy World Championships in Anchorage, George was an unknown newcomer with a stiff leg.  He finished first on day one, second on day two and captured the crown with a first place finish on day three.  Four years later he returned to the Fur Rondy and captured the championship with dogs he’d raised and trained himself.  That victory truly belonged to George.

While on the runners, George didn’t look like other mushers. He stood on his right fused leg and kicked rhythmically with his good left leg.  His style was unique and recognizable from far off.

In his eulogy, Attla’s nephew Chris Simon said, “Despite the obstacles, he became the greatest musher on earth and perhaps the most important thing Attla taught young people was to be proud of where you come from and don’t let anything hold you back from becoming the best you can be.”

Attla’s life inspired the movie, “Spirit of the Wind,” filmed in 1979.  The movie was republished in 2001.  The Huslia Hustler was also know as the King or King George.  In 2000, he was awarded the Best Musher of the 20th Century award.  He was amongst the original five inductees of the Alaska Sports Hall of Fame.  In a speech for that occasion, King George told youth, “I pass the torch to discipline your mind and your body to give your best.  If I can do it, so can you.”

Kotzebue musher, John Baker who is currently on the Iditarod Trail is quoted by Judy Ferguson.  Baker says, “It was incredible for him to stay on top of his game for so long.”  Fergurson’s story, “No Stopping George Attla,” was recently published in the News Miner.