Good morning from cold Huslia. It really IS cold here. The Iron Dog is sitting in front of the Jimmy Huntington School. The thermometer I have mounted on it shows 40 below. That is as low as it goes. Some of the locals coming in say it is 50 below, depending on where you live in town. The mushers have a great setup here. So do we media people. We are very well taken care of. The teenagers are selling raffle tickets for locally made beadwork, jewelry, and breakfast bagels are cooking. 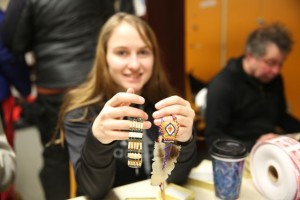 That is a stark contrast to the mushers out on the trail. 40 to 50 below is tough going. It changes the consistency of the snow completely. That is reflected in the run times of the teams working their way over here. When it is cold like this, the snow feels like sandpaper. It crunches underfoot like Styrofoam. Running speeds have dropped from 8 miles to about 6 miles an hour. That is screwing up some of the musher’s race plans. An 84 mile takes close to 9 hrs at normal speed and can be done in one long shot without taking too much out of the team. But when that speed drops, the musher needs to rest and that is what we are seeing with the teams getting over here now. Camping out is a very cold affair. Luckily there is that shelter cabin at 37 miles (47 from Huslia ). Our Insider crew caught up with Martin Buser there yesterday. He did a great interview about how he is changing his run schedule. Take a look at that video. It is very worth watching. As it sounds, we have 2 mushers now in this race deciding to change their career after being in this sport for a long time. 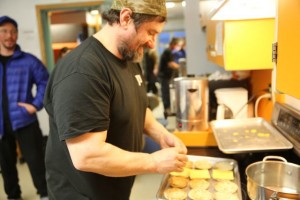 Some of the mushers who took it a bit more conservatively, notably Mitch Seavey, who took his 24 in Ruby, and Jeff King, who took his 24 in Galena are on the trail running now. They will have the advantage to now get into the warmer part of the day. Both seem to be moving well. I am taking a wild guess here now that Mitch will camp out on the way here and that Jeff might attempt to run straight here coming fresh of his 24 hr layover. Bruce and I both agree that we do not know what Aliy Zirkle will do. When Bruce talked to her, she said that she looks at the next 160 miles as a run to Kaltag. What does that mean? Will she come three quarters of the way then go through there and camp again? Or will these temperatures influence her plans? 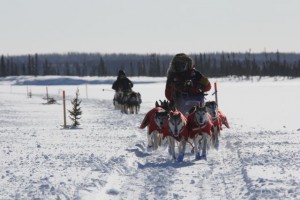 Dallas Seavey made up a lot of time on Thomas Waerner and the other mushers. He really started moving. His team was not tired coming into his 24 hr layover. Now they are getting some very quality rest here. He has been resting a lot of his dogs during the runs. It looks like that Dallas is, what he calls, “creating a monster” again. How long will Aaron be able to keep his lead?  Hugh and Ken are also sitting in a good position and then there will be a lot of fast moving teams leaving Galena. 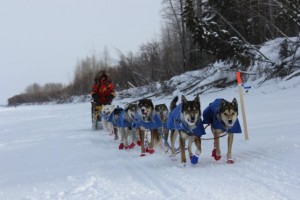 Once it warms up, I hope to get some outside pictures!