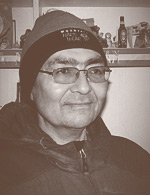 Paul Johnson, 53, was born and raised in Alaska. He moved from St. Michael to Unalakleet in 1964 to be close to family while attending Covenant High School and has lived in Unalakleet ever since. After graduating as valedictorian from high school, he attended UAA four years in the School of Business and Finance. He says he grew up around sled dogs. "My dad used them to provide for the family until 1964, trapping, hunting and general travel. I was interested in the Iditarod from the first year it ran." His brother, Henry, ran the Race in 1980 and he ran in 1986. He has been involved with the Norton Sound Sled Dog Club from its inception. In 2009 and 2010, Paul helped his brother, William "Middy", train his 2010 team. Since they had a lot of time and resources invested in the 2010 team, he was then encouraged by his family to run in 2011. "I enjoy the challenge and I want to do the best I can in 2011." Paul is a member of the Unalakleet Covenant Church and the Norton Sound Sled Dog Club. He lists his hobbies as hunting, fishing and building things.