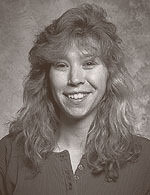 Trisha Kolegar, 35, was born in Ohio and has been in Alaska since 1994 when she came to be a dog handler for DeeDee Jonrowe. She began mushing when she was five years old. She is running Iditarod as a kick-off fundraiser for her new nonprofit organization, “Autism Alaska.” Dubbing her run and the fundraiser “Idita-Race for Autism,” Trisha hopes to raise money and awareness for the devastating disorder that strikes one out of every 166 children. Autism is a brain disorder that affects a person’s ability to communicate, reason, and to interact with others. Trisha’s three-year-old son, Timothy, suffers from an autism spectrum disorder. In her rookie run in 2000, Trisha ran an energetic team of puppies for Lynda Plettner. A hunting dog trainer by trade, Trisha is hoping to do the same again with her new team of Plettner puppies. “I love training dogs. I never thought that when I had a child I would be using those same skills. But many children who suffer from autism learn best through behavior modification training. The cost of such programs can be staggering and are usually not covered by insurance. The mission of Autism Alaska is to provide financial support that will put effective treatment within the reach of all Alaskan families. Trisha is confident that her new team of puppies will make it to Nome. “We will not be front-runners for sure, but we will make it there. As I click off the miles, I will be thinking of my son, Timothy, and reminding myself that in the same way, we can conquer autism, one mile at a time, one child at a time.