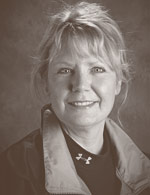 As a descendant of William H. Seward, Deb ‘Danny' Glenn, 53, has always had a fascination for the Alaskan wilderness. Born and raised in Michigan, it wasn't until she and her mother and daughter came to Nome to watch the finish of Iditarod that she realized where her real passion lay, owning sled dogs and being out in the wilderness with them. During her stay in Nome she became friends with Dick Mackey who later introduced her to John Barron. She trained dogs on the mountain in Montana with the Barrons for two years, selling her nursing home and commuting back and forth to Wisconsin to work part-time and spend time with her family.  Finally she was able to rescue a few sled dogs she could call her own.  She also had a litter of pups she has raised and trained to complete her own Iditarod team.  This summer the town they lived in changed their dog ordinance and gave Glenn ninety days to get rid of her dogs.  Instead the family gave up the home they had built with their own hands and where they had raised their family, and moved into an abandoned farmhouse.  Who would have known, but around the corner from their ‘new' place, lives the founder of Berntsen International, who surveyed the Iditarod trail.  After reading an article about Glenn in the paper, and seeing the dogs on his way to the office he put two and two together.  They became friends and as a gift he gave her the only survey marker not in the ground on the trail.  She is now training out of Al Hardman's cabin and training up his team too.  Deb did post-graduate work at the University of Wisconsin, Madison, is married to Bill and is the mother of Emily, Drew and Garrett.  She is looking forward to getting a kiss from their new granddaughter in Nome.