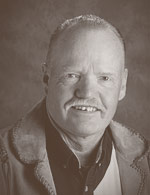 Butch Austin, 58, was born in Steamboat Springs, Colorado and is a fourth generation Colorado native. He has lived in Colorado his entire life except for his two years in the U.S. Marine Crop. He has been retired from the U.S. Postal Service for two years. In his youth, Butch made a living training horses, working as a hunting guide and free-lance writing. Butch organized the Western Slope Chapter of the National Wild Turkey Federation and served as both State Vice President and Chapter President for ten years. Butch has been a fan of the Iditarod since the 1970’s. He became an avid fan after reading “Winter Dance” but never considered running the race until 2003 when Jeff King put a seat on his sled. He then discovered he had an Idita-rider just a few hours away in Glenwood Springs, Colorado. After seeing the innovations of the dog sleds and talking to Bill Pinkham, he decided to go for it. Butch has made several friends through dog sledding but the dogs are his best friends, except for the times they dump him off his sled and he has to walk back to the truck! Butch has a lot of support from his family, friends and businesses in his hometown. Butch’s hobbies include big game hunting, turkey hunting, Border Collies, fishing and bowling. All these have taken a back seat to running and finishing the Iditarod. Butch has three grown children, Jennifer, 34, Cas, 32 and Meagan, 22.