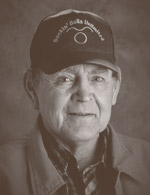 Gene Smith, 64, was born on a sheep ranch in Omak, Washington, where he still lives in the same house in which he grew up. For seven years, he crop dusted and for 14 years he bought and logged timber land. "I've been racing bulls for 10 years, with two bulls going to the PBR finals in Las Vegas." He says he is "retired" now. He first came to Alaska in March of 2005 and became interested in mushing after riding with Rayme Redington at Iditarod Headquarters. He now spends his winters in Knik after purchasing a home there. Last year he intended to run the Iditarod but after an accident at his home in Omak in which he ended up with a broken neck, he had to skip the Race in 2007. He is married to Lynn and has two sons, Robert, 44 and Smiley, 43. He says his hobbies are raising rodeo bulls and flying.