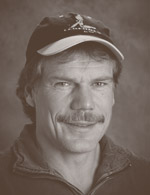 William Kleedehn was born in Germany in 1959. In 1981 he came to Canada to start a new life and adventure after a bad traffic accident that made life in Germany boring. He says, “Life was especially boring after I read in our local newspaper how close Rick Swenson lost to Dick Mackey in the 1978 Iditarod. I began mushing in 1983 and racing sled dogs a few years later. I now live near Carcross, Yukon Territory surrounded by mountains and sled dogs with my boys Tim, 16, and Logan, 15. I rent cabins and am a tourist operator as well as a dog musher. I entered the Iditarod because it’s about time!” Kleedhan’s hobbies are hunting, fishing, photography and outdoor stuff.