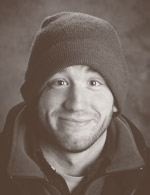 Richard Savoyski, 22, was born in New York. His early years were spent in New York and the family moved to Minnesota when he was nine years old. He later moved to Montana where he attended Montana State University for two years and studied land resource management. While attending school he was also doing sled dog tours. He began mushing in 2005 and says that hearing stories of the trail and hearing about the thrill people get from running it made him aspire to run the Iditarod. He moved to Alaska recently “to get closer to serious dog mushing.” He is currently working at a summer sled dog excursion company in Skagway.  He says his hobbies are fishing, skiing and camping.