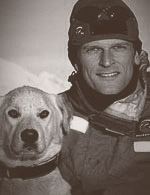 Emil Inauen was born in Appenzell, Switzerland 34 years ago. As a son of a Swiss family faced by steep rock walls Emil begin climbing at birth. He finished school and the profession as carpenter in Appenzell before turning 20 and qualified into the military airborne special force in 1994. In 1996, after a bad accident that made life very tough for more than a year, he started training in the mountains again. He got his first contract to be a professional a year later. In all the years he traveled a lot to Canada as he started running dogs with a friend in British Columbia. From there he brought the first sled dog back to Switzerland and the Onelements Kennel was born. In 1999 Emil profiled as a steep skier all over in Europe and got the professional contract from Rossignolthat he still has. He always tried to broaden his experiences and set new limits. After an expedition in Alaska six years ago, Emil met Frank Turner in the Yukon traveling. It was Turner, the 1995 Yukon Quest Champion, who made Emil’s passion change from steep wall dog touring to long distance racing. Eml now lives with his wife, Barbara and children, Niana, Noe and Amely and 20 dogs in the high range of Davos. He says, “entered the Iditarod because I would do it any way next year. I never thought one second back to a climbing project after my first race with my own dogs.” Emil says his hobby is his family.