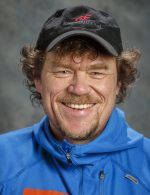 Lars Monsen was born in Oslo, Norway, in 1963. He has been mushing since 1997 and has completed the Femundløpet 600 and the Finnmarksløpet 1000 many times. . He has been a full time adventurer since 1991 and has spent more than 4,500 nights in a sleeping bag, more than half in extreme winter conditions.

Lars Monsen has produced 12 national television series and written some 20 books. His trademark is “long expeditions.” He crossed Canada on foot, canoeing and dog sledding in 947 consecutive days. A similar Across Alaska Expedition lasted 10 months. He has bushwacked on foot across Kodiak and Admiralty, and through Katmai, and has canoed several Alaskan and Canadian rivers. He has led two 30 days expeditions with 11 disabled people through the Scandinavian wild, and been on many 30-60 days bushwacking expeditions north of the Arctic Circle in Scandinavia.

Lars is married to San Francisco-born singer Trine Rein (www.trinerein.com), and they live one hour drive from Oslo, Norway.

The 2018 Iditarod is Lars Monsen’s third. He has 27 grown dogs to pick his team of 16 starters from. At least half of the team has finished the Iditarod two times. In 2016 he ran the race to learn and finished 29th. In 2017 his goal was top 15, but he ended up finishing 26th after “sleeping” five hours on the Golovin Bay sea ice, during a storm, just 5 miles from White Mountain. His goal in 2018 is top 10. Anything is possible.