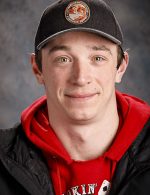 Matt Hall, 31, was born and raised in Eagle, Alaska on the Yukon River, where he worked his trap line with his sled dogs and guided week long expeditions for his parents company, Bush Alaska Expeditions. He started mushing when he was just two years old that began his dream of racing. The first generation of pups that would create the foundation of his future race team was then born the summer he turned 16. He moved to Two Rivers, Alaska, to pursue competitive racing and completed his first long distance race, the Yukon Quest 1000, at the age of 22. His kennel, Smokin’ Ace Kennels, sits on a 40 acre parcel of land next to the Chena River. He maintains an off-grid life style by hauling water and firewood with his Smokin’ Ace family of 31 Alaskan Huskies. For the last 13 summers, he has lived and worked for Alaska Icefield Expeditions on the Denver and Mendenhall Glacier. Winters are spent training, guiding tours and enjoying this encompassing life of mushing with his dogs. At the age of 26 he was the Yukon Quest 1000 champion of 2017 and continues his racing career by competing in his 5th Iditarod of 2023.