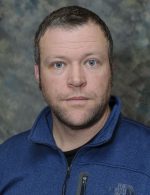 Jason Stewart, 42, was born and raised in the Washington, DC area. He received his Associates of Arts Degree from Hagerstown, Maryland in 2002. When he was 12, he started spending summers in Alaska visiting his dad and his brother, Since he got tired of feeling homesick whenever he left Alaska, he left Maryland permanently in 2004 and moved to Alaska. He got started running dogs with an overnight camping trip in 2000. In 2011 he became a handler for another musher. In 2012, Jason met his future wife, Melissa Owens, and began getting as serious about her as he was about dogs. He ran his first race in 2015 and “hasn’t stopped since.” He and his wife own and operate Owl Creek Kennel, which was started by her parents in Nome in the mid 80’s. Jason has worked as a Corrections Officer for the past three years. He is also an Advanced Glock Armorer. He enjoys building dogsleds in the off season and helping his wife with her business ventures. Jason and Melissa welcomed their newest member, Ellen Patricia, to Team Stewart in August of 2017. Jason also has a son, Caswell who is 12.