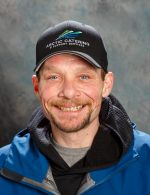 Jason Mackey, 46, was born in Alaska and raised in the Mat Valley and at Coldfoot. He says he’s been mushing “since I was big enough to hold onto the sled.” His mushing career began when he started running junior races back in 1983. After four Jr. Iditarod’s and four Jr. World Championships, he went into distance mushing. The first Iditarod he remembers was the 1978 Race. “Dad won in 1978.” Jason says, “I grew up with sled dogs. It’s what I know and what I love!” Jason has been a heavy equipment operator for the last 12 years and is currently a superintendent at the Toghothele Native Corporation in Nenana. Jason is married to Lisa and they are the parents of Patrick and Jason. Jason has been a heavy equipment operator for the last twelve years. He says he enjoys kayaking, berry picking and spending time with his family.