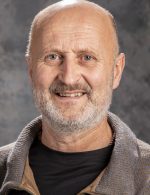 Mikael Jutila, 58, was born in Jakobstad, a town on the west coast of Finland. As he grew up he took part in many different sports and table tennis became his favorite. He spent a lot of time camping outdoors in the wintertime and it was only natural for him to get some sled dogs to haul his gear around. In the early ‘80’s his brother got some “real” sled dogs and Mikael helped him while taking part in local sprint races. In 1986, he got his own sled dogs and his mushing career started. As they had mostly sprint and mid-distance races, his breeding and training were focused on those events, even while his eventual goal was long distance mushing. Since 2006, he has been running all the longest sled dog races in Finland, Sweden and Norway. He says, “Now I am at the top of my mushing career and looking forward to his long-time dream of running the Iditarod.” Since 1985, he has helped many tour operators in their businesses during their most hectic time in December and January. Mikael has two adult daughters, Zofia and Anna, and two younger daughters, Linnea, 13 and Inger, 12 and one granddaughter, Simone. Mikael and his partner, Ulla, live 10 miles outside of Jakobstad in Pedersöre training and raising their small kennel. Due to unstable weather conditions there, they go North for serious conditioning and training in late November. Mikael wants to thank especially Axaeco for sponsoring and helping with top quality gear and for their dogs. Mikael trained to be a computer mechanic and has been working at that for 20 years. He lists his hobbies as table tennis and sports.