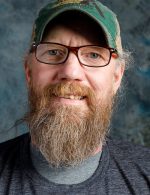 Eric Kelly age 52, was born in New Haven, Connecticut and grew up in Barnard, Vermont. He spent his younger years hunting, fishing, riding showmachines and exploring the Green Mountains. Later Eric traveled extensively chasing music and adventure before settling in Prescott, Arizona. After a chance vacation to Alaska in 2007, Eric and his wife Laura packed up the family and headed for the ‘Last Frontier’ where he took a job as a sprinkler fitter with Taylor Fire Protection. In 2013 Eric met Jamaican musher Newton Marshall and had the chance to help him prepare for the 2014 Iditarod. This experience created a passion for sled dogs and the sport of mushing. Eric spent the next few winters working with and training Kathleen Fredrick’s ‘Shameless Huskies’ from his property in Knik. In 2018 he decided it was time to start his own kennel and acquired his first 12 sled dogs with the goal of running the Iditarod.

The Daybreak Kennel has grown to over 30 dogs. Over the past several years he has enjoyed training for and running mid-distance races, improving his skill set and bonding with his team of Alaskan huskies. Eric looks forward to taking part in his second Iditarod race.

A big thank you goes out to his wife and kids, as well as the handlers, sponsors and all who have supported the Daybreak dream. Follow us on Facebook @DayBreakmushing-Eric Kelly or @http//www.Daybreakmushing.com