Watching Iditarod from the West 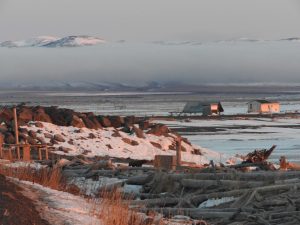 In Native Alaskan villages, landscape dictates the calendar. Certain events mark the year such as late-summer berry-picking, fall caribou and moose hunting opportunities to harvest meat for food and hides for warmth, and river freeze-up which connects surrounding villages for easy travel by dog team and snowmachine. Out here, in rural Alaska, the school year and holidays are an artificial overlay to nature’s decree, for listening to the landscape teaches the language that orchestrates life: when the days start getting longer, when the sun returns, when the river breaks up, when the first salmon gets caught, and when the geese fly back and the sound of fat meat is in the air again. These are the tenets by which subsistence life flourishes, and in the middle of it all––when the days are getting longer but the rivers remain frozen––for some, there is Iditarod.

Many of us live in a world that Iditarod leaves behind. It’s a race that begins in civilization and travels away, to out there. That’s part of the race’s magic and a reason we become Insiders and stay glued to the GPS tracker. We are armchair travelers on an adventure into the unknown, in awe of the four-legged athletes that are in their element on that journey. This vantage point, however common, is only one perception of the race. For villagers along the trail, the Iditarod comes to them.

In rural Alaska, the race is a slow buildup from the usual quietness of the village. At first, a few sporadic flights buzz through in which the Iditarod Air Force brings straw and mushers’ food drops. Then, a few days before the first teams arrive, communications equipment and volunteers trickle in. The first vets may arrive one day before the first team followed by a lone Insider (often times me). Personnel doubles then triples as the checkpoint prepares for the arrival of the first team. More of our Insider crew arrives followed by outside media. Now the small village of, say, 200 people swells with visitors and excitement.

The community hall is abuzz as the first musher arrives at the next village upstream.  As the teams get closer locals bring some of their year’s harvest to the checkpoint or community hall. Many share moose ribs, caribou stew, and salmon with the village’s guests and incoming mushers. The arrival of this food is no accident. This timing stems from a combination of two things: the GPS tracker and, more importantly, local knowledge of the land.

Rather than look at the tracker and guess why a team has slowed, many villagers look at the tracker to confirm their suspicions, such as a team slowing down due to overflow from a recent warm spell, or the heat of the day deteriorating an already punchy trail. For locals, the trail is not a path into the unknown but part of a system that connects neighboring villages and intersects a knowledge mosaic. Perhaps it shoulders the hill with the best blueberry patch, and if you break off to the north before the pond that a new beaver family moved into last spring you’ll find the trail to your uncle’s trapline. Historically, dog teams enhanced and broadened intimate knowledge of this land. Therefore, no matter how artificial the race seems upon the landscape, it remains a part of it by paying tribute to this lifestyle, these places, and the generations of people who have called these spaces home. 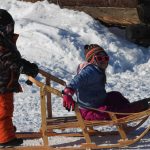 Kids on a tag sled in Kaltag

The race was envisioned to preserve dog teams in modern Alaskan history. Therefore, in one sense it renews a connection to something that is dissipating in rural communities:  dependence on dog teams. Up and down the trail, old-timers recall stories of dogs that would lead you in a snowstorm; dogs that could run traplines as well as haul loads of caribou meat; dogs you could drive like a snowmachine right up to someone’s front doorstep and park with stylish precision and little thought. Yet, simultaneously, the race represents a spirit that remains vibrantly woven into the landscape. As more people trade dog teams for snowmachines, what emerges is a modern-day version of the same lifestyle that for generations depended on raising good dogs in order to feed and clothe one’s family.

This lifestyle is a bond between countless generations who have harvested this land, and cared for the food it provided; who taught their children how to care for fresh meat and how to render bear fat for dipping berries in. They taught them if your feet get wet then stop and start a fire, and always travel with extra food and clothing. Out here there is no rescue button, just the traditions and knowledge handed down by your ancestors. So listen to the landscape––it will tell you when to go and when to hunker down. Share with your neighbor because you never know when you might be the one who can’t find a caribou. Everything one needs is right here and always has been, and these living traditions are the glue that bonds the community.

The race celebrates this connection to the landscape, although it can fall to the periphery as we get excited over checkpoint times and judging whose team looks the strongest. For villagers along the trail, dog teams travel for days to arrive at their home. Some mushers won’t make it there because the trail will have beaten them, but those who do will be greeted by the traditions, generosity, and warmth of these villages, without which there would be no Iditarod.