John Schandelmeier, a fellow Yukon Quest Champion and fellow Arm Chair Musher has gotten himself in a hot seat with an article about scratching. Scratching a race is a very controversial subject. No musher makes that decision lightly, then historically looking, some rarely scratch like John himself, then others scratch more often like his own wife. I am sure between the two they have some heated discussions about that subject. Each musher has their own reason and at the end of the day has to live with the decision to pull out. All too often is the adage “ for the well being of my dogs “ put as a reason, I am with John on that point.  That being said, the standard sentence is used “ officially “ mainly. When you do talk to the individual mushers, they offer a lot more detail and insight as to why they pulled out. 3 Iditarod mushers have become victims of the harsh temperatures on the way to Dawson City: Scott Smith, Jeff King, Ray Redington, all teams I had pegged to be somewhere in the front of the standings. Scratching happens to the best of ’em, and many factors contribute to that. It does not make anybody a bad musher 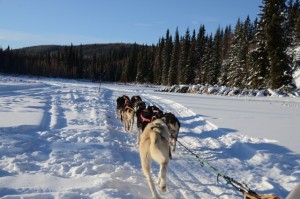 I have been called out too, for naming names. It is something us writers have to live with, that we are not always popular, and do not always voice an opinion which everybody wants to hear. Same as John, did I have to learn to not take any personal attacks too much to heart. In the big picture one has to look at, what the individual has contributed to the sport, and in John’s case, that is more than most mushers have, with putting on countless races, tutoring many mushers and writing for years. He means no harm, and same as mushers sometimes do, or say,  things which in hindsight they would do a bit different, so might John realize in hindsight that he could have chosen better words. But equally uncalled for, are now the personal attacks at John and Zoya. 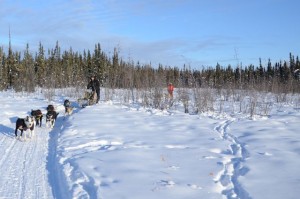 Back to the trail: Brent has left Eagle. 12 dogs. Looking very alert. Not quite the same can be said about himself, but that is no surprise. While his teams sleeps away for 90% of their rest break, Brent spends much of that time taking care of them. Having only 24 hrs in Dawson City instead of 36 hours means also less rest for the musher. It is a game changer. It sure is a joy seeing team “ wild and free “ performing so well. While Brent split up the run to Eagle in 2 runs of 9 plus hours, Allen is sticking to the more traditional schedule of 3 runs with 2 breaks. He camped out at Sandy and Earls who live a few miles upstream the 40 Mile River. They carved out a piece of heaven on a 100 plus acre property which used to be an asbestos mine. Sandy makes killer pies. I would not mind a piece, but to taste them is a true privilege for a Quest musher. The 40 mile river flows quite fast in the summer and one would never think it freezes solid enough to put in a good trail. The 40 Mile can be brutally cold, this year it is the opposite and the warming trend has reached the far north. Other mushers like Ed Hopkins and Cody Strathe have also chosen to camp out on the river. Both teams are traveling a bit faster than Joar and Hugh ahead of them. Some shuffling in the places could be quite possible. 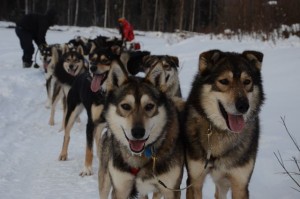 A very impressive run is put in by Damon Tedford. Damon is a true rookie. He ran all of his qualifiers this year, matter of fact he squeezed in an extra one, the Northern Lights 300. That is tight timing with the Quest coming up and showed true commitment. That commitment is paying off and at this point he is the highest rookie in the field, well into the top 10 and has the fastest team on the trail. American Summit is looming next for him. In 2009 American Summit was as beautiful as can be, peaceful and quiet, with moonlit views for many miles. In 2011 American Summit was pure hell. While side-hilling in screaming winds all of a sudden my team came to a complete stop. I grumpily trudged to the front to wonder why Inuk and Skunk had stopped, to find them balled up into a snowmachine. The machine of trail breaker Mike Reitz, who had gotten horribly stuck in a snowdrift. It was blowing so hard, that I could not even see the front of my team. Brent, Allen, Hugh and Joar seemed to have have a beautiful ride over, judging by the pictures I have seen, let’s hope it stays like that for the remaining mushers too. 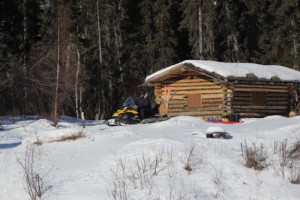 Brent has spent part of last night as Mike Sagers Trout Creek Cabin. Trout Creek is a real gem. It is a bit of a detour off the river. Mike usually puts up pie plates indicating the turn off. Parking is very sheltered in there and one can be sure that Mike has a pot of hot water on the stove and a good moose stew brewing. Trout Creek and Mike are what the Yukon Quest is all about. Northern hospitality. Mike has opened his cabin for decades, has hauled blocks of ice to his cabin for many days, to make sure each musher has all the hot water they need. Last winter during a personal trip I was able to stay at this slice of heaven for a bit more than only 4 hours and truly loved it. Next up is the Kandik River Cabin, a park service cabin at the mouth of the Kandik River. Most mushers pass by that one and go directly to Slavens. In one of my first Quests, where it took me 4 runs to go from Eagle to Circle, I stopped at Kandik and was all excited to find a pot of water on the cabin floor, using it to make my dogfood and fill my thermos. I noticed the water looked a bit brown and paid no further attention. Shortly after leaving the cabin I did not feel all that great and neither did my dogs. It then dawned to me, that I might have used the “ slop bucket “, which resulted in an un-voluntary 19 hrs recuperation stay in Circle. We did make it to the finish line that year. 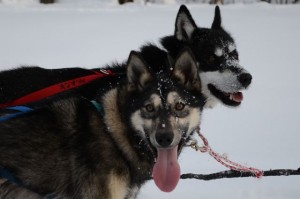 My take on the competition at this point is that it is pretty much a one man race. Brent has a big lead, kind of similar to that of Hans Gatt back in the 2003 Yukon Quest, who at that time pretty much left any checkpoint in the second half of the race, before any of his competitors even arrived. Brent’s team is traveling fast and he has a good number of dogs, with some room for error. With Brent training a lot in adverse conditions I can not see him likely to stall on Eagle Summit, if anything, he has helped many other mushers up that mountain. Looking at the temperatures, which are forecast to reach the freezing point here in Fairbanks by the weekend during the heat of the day, that might become a factor for him. He has heavy coated dogs. That means he has to avoid daytime running, His current schedule has him set up for that. Allen still has a full slate of 14 dogs. Time will tell, how willing, or able he is to push hard. At some point he would have to do what Brent did in Pelly, and skip a rest to get within striking distance. Time will tell what he will do. 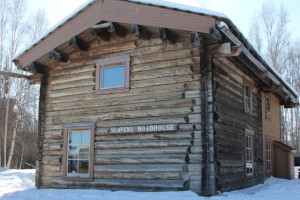 Time to get my snowmachine to the shop ( again ) so I can be ready to hit the Iditarod Trail in a few weeks when it starts here from Fairbanks. I am sure excited to see some new country myself.