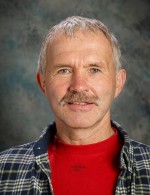 Robert Sørlie, 59, was born and raised in Norway. He began mushing in 1970 and became interested in the Iditarod after “winning all the long distance races in Europe. I wanted more challenge.” He has since won the Iditarod twice. He is back because he wants to finish in a better place than last time he ran. Robert is married to Elin and they are the parents of two adult children, Håkon and Magnus. Robert says he enjoys nature and camping.

Rookie of the Year — Sponsored by Jerry Austin