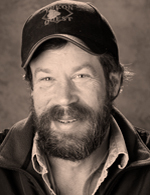 Art Church, Jr., 55, was born and raised in Washington. He moved to Alaska in 1975, he says, “for a change and stayed because I liked it.” He has been self-employed for the last thirty plus years. He began mushing in 1979 and in addition to running the Iditarod, he has served as a race judge on the trail. He lists his hobby as “my wife.”