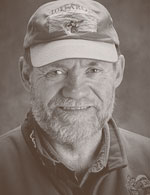 <>Rick Horstmann, 60, says "it's about the adventure, it's about following your dreams, it's about what my role model and friend, Col. Norman Vaughan, always said "Dream Big and Dare to Fail." But mostly it's all about the dogs and the unique passport to the Alaska winter wilderness they provide. Completing the Iditarod is a goal and a grand adventure, but it's really about traveling, camping, and just being with the dogs." Rick was born in NYC but considers New Cumberland, Pennsylvania his childhood home. In high school he saw a presentation on the Naval Academy that included a movie called "Ring of Valor." It showed Naval officers traveling the world, driving ships and flying planes. "I was hooked. I enlisted in the Naval reserves and was later selected for Admiral Farragut Academy, then the Naval Academy." Following a career as a Navy pilot, he and his wife, Linda, settled in Ventura, California and ran a motorcycle training program, but a TV show about flying in Alaska awakened a lifelong dream of flying in Alaska. Being believers in living your dreams, Rick and Linda sold the business and moved to Alaska sight unseen. They have been living and he has been flying her ever since. During a plane trip to Shageluk during the 1997 Iditarod, Rick says he became fascinated by the idea of driving a dog team across Alaska. In 1998, with a borrowed team of freight dogs and four months of mushing experience, he started the Serum Run. The late Don Bowers, author of "The Back of the Pack" and member of the Iditarod Hall of Fame, helped him, like so many others, to get started in mushing. "I kept my dogs at his place while preparing for the '99 Serum Run and helped with his Iditarod team. When Don died, Linda and I became the caretakers for his place, caring for his dogs until good homes were found for them." Rick took some of his dogs on the 2001 Serum Run and the 2002 Iditarod. They ended up buying Don's place and have operated Wings and Paws, providing winter dog sled tours and year around flight seeing through K2 Aviation there since 2002. In 2002, Rick scratched in Galena and later learned that that was where Don had scratched on his last Northern Route Iditarod run. "The checkpoint workers figured the dogs thought I must be lost trying to get them beyond the end of the trail and that Don was having a good laugh." Rick says, "I've been saying since then that between the Serum Run and the Iditarod, I have finished the Iditarod Trail and had the Iditarod experience, I just didn't get the belt buckle, and once was enough; but you know…."