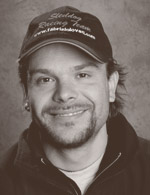 Fabrizio Lovati, 35, was born and raised in Italy. He began mushing in 1986 and ran his first Iditarod in 2004. Fabrizio became interested in sled dog racing after watching the Alpirod in 1988. "My first dogs were from Iditarod champion Joe Runyan and North American champion, Roxy Wright. My kennel is in the Alps of Italy. " Since that time he has participated in most of the major races in Europe. He ran the Alpirod four times as well as the European Championships, the World Champion Middle Distance 2003 and the Pirena four times. He ran the Grand Odyssee and the European Championship in Norway in 2005. A building contractor, Fabrizio is the father of Giorgia, 4. His hobbies are racing in rallies cars, racing super moto, mountain biking , skiing and mountain climbing.