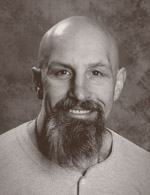 Paul Ellering, 52, was born in Minnesota. For the last three years he has been the owner of Rock Tavern. He began mushing in 1991.In 2005, he ran the Iditarod as the visual interpreter for Rachel Scdoris. He is running the Iditarod again this year because he says, “Sometimes you have to see what you got. This year we race!” A former professional wrestler, Paul has written a book, Wrestling the Iditarod, which can be found on his website. Paul is the father of Rebecca 16, Rachael, 12, and Saul 10.