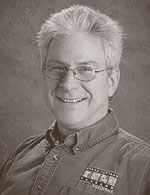 Glenn Lockwood, 53, was born at Ladd Air Force Base in Fairbanks, Alaska. He grew up in western Washington where he said he went from Boy Scouts to skiing and mountaineering in the Olympics and Cascades. “As a boy, my bike, fishing pole and Winchester .32 special were well-used.” His oldest son, Brian, was having trouble with reading in school, so the family moved to DeForest instead of fighting with a big city school. He promised his son that he could have a dog when they moved from the city. Glenn says that the first chapter book Brian was able to read was Balto so, of course the kind of dog he wanted was a husky. They bought the first husky, then another to be a companion to the first and a few months later had nine Siberian huskies. Brian graduated with honors and Glenn ended up with a dog team. The entire family, including, mom, Brenda, and daughter, Christa, are very active. Brian won the IFSS Jr. Championship in 2002 in the four dog, 20 mile class and medaled in two events in the state swim meet last year. Brenda and Christa are active in the 4H horse and pony program. Christa won grand champion at the county fair last year with her horse. The family operates a small horse-boarding stable and leases out their own horses to 4H kids.