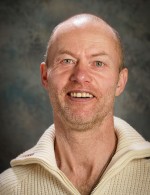 Tore Albrigtsen, 49, was born and raised in Tromso, Norway. Tore is a wilderness guide and together with his girlfriend, Sandra Gollor, runs his own company, Active Tromso, offering dog sled tours, kayaking and mountaineering. He began mushing in 1978 and ran his first Finnmark race in 1987. He has completed that race 13 times. He ran the Iditarod in 2006 to celebrate the 10 year anniversary of his first long distance race. He said he had wanted to run the Iditarod ever since the first Norwegian, Stein Fjestad, ran it in 1977. He has also participated in classic ski expeditions and did the Finnmark and Iditarod on skis with one dog in 1996 and 1997. He climbed Mt. McKinley in 2007. Tore is a member of the Tromso 06 Omeen Sled Dog Club and says he enjoys kayaking, climbing and the Liverpool Football Club. He is the father of one adult daughter, Silje and the grandfather of Emma, 4.