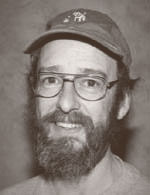 Randy Cummins, 50, was born in Texas and received his medical degree from Southwestern Medical School in Dallas. He practiced medicine in Washington thirteen years. He watched the start of the race in Anchorage in 2001 and says he knew he was hooked. He began mushing in 2002 and his kennel has steadily grown since. In 2003, Randy quit his medical practice in Washington and moved to Big Lake to run dogs. “I’m entering the Iditarod this year to have the chance to run the southern route and to improve on my time from last year. I have been mushing dogs for three and a half years and what started out as a hobby has become a year round lifestyle. I give sled dog tours for Alaska Excursions in the summer in Skagway, then train and race from my home in the winter. Without the support of my wife, Kim, none of this would be possible.” Randy is a member of the Aurora Dog Mushers Club, P.R.I.D.E. and the Iditarod Trail Committee, Inc. and says his hobbies are “anything outdoors.”