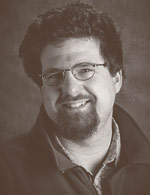 Richard Hum, 35, was born in California where he says he “surfed for 23 years.” Then he was in Oregon for six years where he was a wild land firefighter off and on. Then he went to Southern Utah, northern Utah and south Idaho. He graduated from the University of California at Santa Cruz with a degree in Earth Science. They moved to Alaska in 1999 because, he says, “we were always moving around and we liked it.” He began mushing six years ago on the northern Bering Sea Coast, where he was lucky enough to learn the art of dog teaming by a true master and extraordinary teacher. He moved to Talkeetna three years ago where he began a small non-profit organization, Kigluait Educational Adventures, that is dedicated to sharing his appreciation and awe of wild lands to students across Alaska and the lower 48 using modern telecommunication technologies. He says he began thinking about running the Iditarod when he bred his first pups. He is married to Christina. They have one child, Pippin. Rich says he enjoys “anything in the water.”