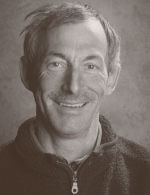 Jacques Philip, 49, was born and raised in France. He received his doctorate in Medicine and practiced medicine in France until coming to Alaska in 1985 because of “dogs.” He had seen a documentary about a sled dog race in Switzerland in 1980 and then got the idea of becoming a musher. He was the first French musher to run the Iditarod in 1985, after having spent the entire winter training with Joe Redington, Sr., who he says was “a real inspiration.” He is also a three-time winner of the Alpirod, a long distance race that used to be held in Europe. In 1990, he climbed Mt. McKinley with five sled dogs and a movie was made of the ascent. In the summer he works as a tour guide in Skagway, giving dog sled tours on the glacier to people from the cruise ships. He also develops web applications using Microsot.NET technology, C# and Pascal languages. He developed a Web Kennel System, a web application that keeps track of Alaskan Husky’s pedigrees on the Internet http://www.dogtec.com/kennels. He is married to Magali.