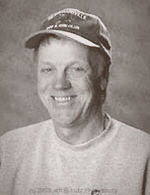 Ben Stamm, 60, was born in Wisconsin and has lived near Argyle since he was 11 years old. He’s been in construction 40 years and also has a boat rental/bait shop. After seeing Iditarod on television and Rick Swenson telling of raising puppies from the time they opened their eyes and then taking them to Nome, that became his main goal. Ben bought four trained dogs and three litters of puppies in the fall of 1999 and has been training and running dogs ever since. Ben is a member of the Wisconsin Trappers, Argyle Rod & Gun Club, Mush with P.R.I.D.E and the NRA. He enjoys hunting and trapping. Ben is married to Alice. They have a son, Scott, 40, daughter in law, Stacey and granddaughters, Spencer 5 and Sadie 1 1/2.