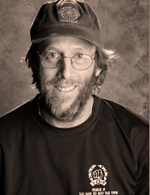 William Pinkham, 53, was born in the District of Columbia and grew up in New Jersey. He went to college and got his degree in geology/polyscience. He went to Colorado in 1980 and fell in love with the Rockies, skiing, hiking, and biking. He began mushing in 1994 after the “seed had been planted when he was a child.” William said he played rugby for 23 years and filled the void left from that when he moved to Colorado, where he moved to get “mountains and space,” with distance mushing. He started racing in 1994 when he started thinking about being out “in the white silence.” William married Jody in 2008 and says, “Jody and I work together with the dogs and other parts or our relationship. They are the parents of Grace Ruby Pinkham, born in January 2011. He lists his occupation as “builder and baby sitter” and his hobbies as biking, reading, climbing, Soo Bahk Do, (Korean martial art) and surfing.