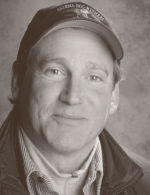 Cliff Wang, 49, was born and raised in New York City and attended the Kansas City Art Institute and the New York Institute of Technology where he studied Fine Arts. He moved to Minnesota 19 years ago to instruct at the Outward Bound School’s winter program. He moved to Montana in 2003. Cliff began mushing in 1987. He was a checkpoint volunteer in 1989 and watching the competitors helped to create his interest in the Iditarod. The 2001 and 2003 champion of the Beargrease Marathon, Wang ran his first Iditarod in 2004. He is married to Helen, a jewelry designer and they have four children: Hunter, 11, Tanner, 9, Hope, 5 and Wiley, 3. Wang is a multi media artist. He enjoys fine arts, script writing and raising his kids. He is a member of Mush with P.R.I.D.E. and the Writers Guild of America.