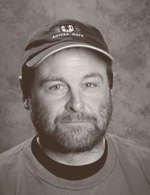 Bryan Mills, 42, was born in Wisconsin where he has lived his entire life. He says he became interested in the Iditarod in 2002 and has been “hooked” ever since. He actually began mushing in 2003 and ran his first Iditarod in 2005. He is excited this year to “see how my veteran dogs will perform. Bryan, the father of Micayla and McRea, twin daughters a year and a half old, says, “I’m a full time dog person and father. Raising twin girls is a full time job and it’s been challenging to juggle their schedule and my training schedule. Bryan lists his hobbies as hunting, fishing and trapping.