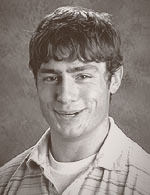 Mike Jayne, 23, was born in Iowa and grew up there on a hog farm. At the age of 16, he moved with his family to the remote Brooks Range. He currently lives in Fairbanks with his girlfriend, Michelle and their “various pets.” He began mushing in 2000 and says since his dad does veterinarian work for many Iditarod mushers, he has been around the Iditarod and has been interested it running it ever since his family started mushing. His younger brother, Peter, and younger sister, Elizabeth, have both run the Jr. Iditarod. His dogs are “mostly from Jerry Riley and a few are from Jeff King and Ramy Brooks. They are last year’s Jr. Quest champions.” His goals for this year are to have fun, do well, but mainly, to just finish. “I am also doing it for an adventure with my ‘puppies’. I hope to pick up some good race experience too.” Mike is a commercial fisherman and works in construction. He enjoys lifting weights, mushing and running.