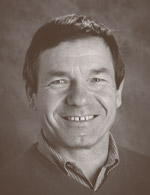 Rudi Niggemeier, 51, was born and raised in Germany. He has been a car dealer in the "beautiful small town of Salzkotten," since 1975. Rudi has been running dogs since 1995 and says he became interested in running the Iditarod after spending his first winter in Alaska in 2002. Now, he says he spends all winter in Alaska with "dogs, nature, nice friends and sled dog competition." and is running a team from Sebastian Schnuelle Blue Kennels. He says, "The Iditarod is after three years of learning, a great goal for me." Rudi enjoys outdoors, biking, sailing and dogs. He is the father of two, Jan, age 16 and Sven, age 21.