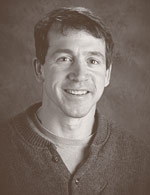 Jon Korta, 42, was born in Wisconsin, and went to college at the University of Minnesota, where he competed in track and cross-country running, and earned a degree in entrepreneurship. He and his wife, Tanya, moved to Alaska in 1993 seeking adventure, found it, and never went back. Jon worked as an elementary school teacher for a few years, before being promoted to a stay-at-home dad. Along with his wife Tanya, and three children Dylan, Kaleb, and Kiana, they live in the Yukon River community of Galena where they own and operate Borealis Bed and Breakfast and are developing an adventure tourism business. Jon has been running dogs for 10 years, but it wasn't until 2000 when he got the opportunity to volunteer as the checker in Galena that he became interested in someday actually competing in the race itself.