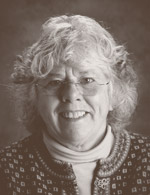 Deborah Bicknell, 62, was born in New Hampshire. She began mushing at the age of 11 and ran her first race with a family pet, a Saint Bernard. She determinedly worked her way up through the junior and adult ranks with the New England and Lakes Region sled dog clubs, earning two fourth places and one second place on the three-day open World Championship Sled Dog Derby in Laconia. During the winter of 1970, she gained experience with Earl and Natalie Norris at their kennel in Willow and placed third in the Willow Winter Carnival race that year, beaten only by Norris and George Attla. 1996 was an outstanding year for Deborah, the first woman to be awarded an "unlimited team" medal by the International Sled Dog Racing Association. She was nominated by the Manchester Union Leader sports writers was one of the outstanding athletes in the state and was featured as "musher of the Year" in Team & Trail. She moved to southeast Alaska in 1981 with her husband, Sandy, and over the next few years, she gave up racing in favor a developing a prosperous boat canvas and upholstering business, but the dogs were never far from her mind. Since Southeast is not a favorable area for training sled dogs, they purchased land in Tagish, YT in the 1990's to maintain and train her team which was comprised of dogs from family sprint lines and long distance race kennels. By this time her focus had turned to distance racing. After getting some mid distance races under her belt, Deborah's turned to a new and greater challenge, the 1,000 mile Yukon Quest. She finished in 21st place out of 29 entrants in her rookie year. In 2006, she and Sandy, along with her sister-in-law, flew from checkpoint to checkpoint to observe the teams on the Iditarod Trail. She told her fellow travelers, "You have to be nuts to go through what those dogs and mushers are encountering on the trail." But after returning to the comforts of home, she couldn't get the Iditarod out of her mind, and one day, said to Sandy, "I can do that!" In 2007, she left the Iditarod start line with the intention of going to Nome and arriving with a healthy dog team. She made it to Rainy Pass, 224 miles into the Race and was stopped by severe winds and sub-zero temperatures. She was the last team out of the checkpoint on Wednesday morning, and wasn't heard from again until a pilot spotted her the following afternoon at the foot of the Alaska Range. With no marker to show the correct Dazell Trail to Rohn (it had blown away), she headed through Ptarmigan Pass, getting soaked in overflow and spending a "night out with the dogs." Deborah's survival instincts pulled her through, but after a night at the Rohn checkpoint and out of concern for her dogs, that was the end of her rookie run on the Iditarod Trail. But as indicated by her entry into the 2008 Race, her desire to reach Nome with a dog team has not diminished!