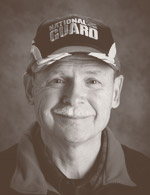 Rodney Whaley, 55, is an Army Master Sergeant, serving on active duty with the Army National Guard. He lived his childhood in Alaska, racing in junior races in the 1960s, and has always remained passionate about sled dog racing. Utilizing the skills he has developed in the Army National Guard the past twenty-four years, he is running the 2008 Iditarod, and is the first Tennessean to have ever entered the race. Whaley began his Iditarod training in 2002 at Nakitsilik Outdoor Adventures in British Columbia, Canada. He has since trained at the Howling Dog Farm in Willow, Alaska and with Al Hardman in Northern Michigan. Whaley resides in Franklin, Tennessee with his wife, Vicki. He is the father of two grown children, Karen, 31, and Rodney Jr., 30. He received his Masters degree from Middle Tennessee State University, is a member of ClearView Baptist Church, Franklin, TN, International Sled Dog Racing Association, Mush with P.R.I.D.E., and Tennessee Secondary School Athletic Association as a certified high school football official, having officiated for 25 years.