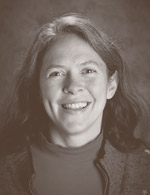 Anne Capistrant, 40, was born and raised in Madison, Wisconsin. She grew up reading Laura Ingalls Wilder and feeling like she was born a century too late. While working on her doctoral degree in ecology at the University of Minnesota in 1992, she met a kindred spirit in her husband Todd. They spent several years moving around the Midwest as education and professional jobs demanded. Anne "retired" from being a college professor in 1999 when their first child was born. After 7 years of training and racing dogs in the Midwest, the lack of snow and dream of living in Alaska drove the family north and they moved to Healy, Alaska in 2003. Anne now fills the role of homeschooling mom, kennel manager, livestock keeper (including milk goats, pigs, chickens, bees, and turkeys) and homestead manger (vintner, gardener, weaver, chef, and accountant). Hoof ‘N' Woof Sled Dogs was formed 11 years ago and has been active in Alaska for 6 years. Anne helped raise and train the teams that Todd ran in the 2002 Serum Run and in Iditarod 2003 and 2004. During these years, Anne was a passionate student of race strategy, food drop preparation, and checkpoint routines. With Rose now 8 and Grace now 6 the time has come for her turn at being the main dog driver. She has spent the past three years preparing herself and her dogs to be qualified (officially and personally) for Iditarod 2008. She is excited to be on the trail that has been a focal point of her thoughts and efforts for the past 7 years. She is a member of the ADMA, the TRDMA and is the Chairperson of the Denali Borough Plannng Commission.