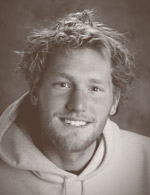 Sam Deltour, 24, was born in Belgium. He received his bachelor’s degree in Medicine and is now in his fifth year of medical studies. He saw a documentary about the Iditarod on the National Geographic Channel when he was 12 and became interested in mushing. So he began mushing in 2006 and came to Alaska and trained at the Seavey Kennels to run the 2008 Iditarod. At some point during that time, he says, "I started noticing a lot of parallels between mushing and Multiple Sclerosis. Slowly, continuously and unpredictable physical functions decrease. Every day is a new challenge, planning difficult, fatigue a given. There were times when I ran Iditarod I could barely stand on my feet cause I was so tired. My mother was a huge source of inspiration for me during such moments. I would like to dedicate every mile I travel and take care of my beloved canine athletes and friends to the one who took such good care of me all those years and to everyone who's living with the same challenges she has to face everyday." Sam finished in 2008 with his sixteen athletes in harness fulfilling a childhood dream.” He says that last winter he was back in medical school and “the musher inside of me was getting pretty bored. I wanted to learn more, experience more, at the same time, I wanted to give more to the dogs. Don’t ask me why I felt like keeping on freezing off brain cells and putting my toes on the line…… Thanks to an athletes status I can run some races during the winter and study over the summer.” Same enjoys kite surfing, playing the guitar and reading.