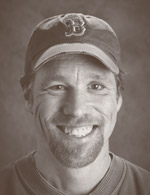 <>Richard Corcoran, 43, was born in Rome, New York and spent a good part of his early years growing up on Narragansett Bay in North Kingstown, Rhode Island. After graduating from SUNY ESF in Syracuse, New York, he headed north to Alaska in July, 1987 in search of adventure and employment. While working as a Fisheries Biologist at a remote Salmon hatchery in Prince William Sound, Rich met a wild mountain man from Trapper Creek (1994) who took him on his first mushing adventure! Years later, Angela, his wife bought him a small (seemingly harmless), "recreational" dog sled for Christmas. The only thing missing at that point were dogs to pull it. Today, Rich and Angela, with the help of their 25 Alaskan Huskies, operate Quick Foot Kennels in Valdez, Alaska. Rich's main goal is to see and experience new areas of the Alaskan countryside while bumping and bouncing along the trails behind his team of huskies. He has participated in various mid-distance races throughout the state and will realize a long held dream when he runs the famous Iditarod Sled Dog Race in March, 2008.During the summer season you can find Rich working (producing dog food) at the Solomon Gulch Salmon Hatchery in Valdez.