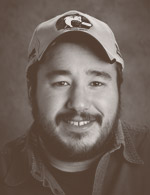 Darin Nelson, 38, was born and raised in Kotzebue, Alaska. He began mushing soon after returning home from the Marine Corps in 1992 simply because his father, Louis Nelson, Sr. had sled dogs. Since collecting his own dogs in 1999, he has raced the Kobuk 220, Kobuk 440 and Kuskokwim 300 numerous times, along with other races throughout the state. He owns and operates Kobuk Lake Kennels outside Kotzebue which consists of breeds from top competitors of all sled dog disciplines. For the last few years he has worked as an operator unloading and loading aircraft for Northern Air Cargo, Lynden Air Cargo and Everts Air Cargo. Along with being a commercial fisherman he subsistence hunts and fishes all year round. After raising a family and working for the last decade, he now takes the fall and winter off to train for the 2008 Iditarod. He says his father has been racing his dogs the last 3 years, now it is his turn to learn the trail and see what all the hooplah is about. He says he enjoys dog mushing for the simple fact of being able to carry on the tradition passed from his ancestors and he is proud to be Inupiaq. Darin has four kids and one on the way this March, Taylon, 14, Swede, 12, Haley, 6 and Chase 2. His companion, Vickie, also a dog musher, is a big part of his success and helps with kennel chores and training year round. Darin will be the third Nelson to sign up this year, his father, Louis Sr. and his older brother, Robert, will be on the trail also.