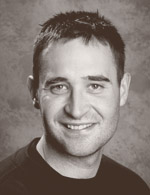 Bjørnar Andersen, 31, was born in Oslo. He moved to where he is now because of his wife and better training conditions. Bjørnar began mushing in 1991 when he was 13. He has won all the distance races in Norway. He placed fourth in the 2005 Iditarod and is the only rookie to place in the top five since Harry Sutherland placed third in 1976. Bjørnar works as a refrigeration mechanic. He is entering the Iditarod because "I like wildlife together with dogs and competition. I like traveling with my dogs." Bjørnar is married to Lill and they have a one year old son, Marius.