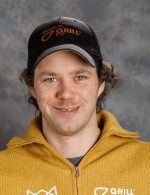 Jerry Austin Rookie of the Year