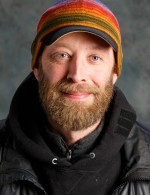 Mike Ellis, 43, was born in Massachusetts and raised in New York and came to Alaska in 2007 after living 25 years in New Hampshire. He received a B.S. in Geography from Plymouth State College in New Hampshire. He began mushing in 1993 and says he’d been interested in the Iditarod since watching Rick Swenson and Susan Butcher on Wide World of Sports when he was a little kid. He raced in New England and Ontario from 1994 to 2007 and then moved north to begin racing in Alaska. He has since run the Yukon Quest since 2008, his highest finish being eighth in 2011. He has won the Vet’s Choice award in the GinGin 200, the Copper Basin 300, The Two Rivers 200 and the Yukon Quest. “I am a musher and feel it’s what I was born to do. My wife, Sue, has supported me and put up with centering our lives on our dogs and this sport. Last year, we did our first Iditarod and now we want to do it better! Over 20 years in the ‘sport’ of mushing, and we still learn every day. Respect Your Dogs!” He lists his occupation as “musher” and when asks “for how long”, he says, “Not long enough!” His hobby is “filling the freezer.”