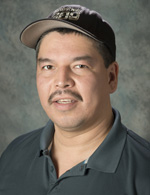 Louie Ambrose, 42, is a Native Alaskan (Koyukon Athabascan) born in Tanana and raised in Galena. He says the only time he was out of Galena growing up was when he went fish camp in the summers. After high school, he attended Haskell Jr. Indian College in Kansas in 1989-1990. In 2003, he and Jerrine Austin, daughter of the late Iditarod veteran, Jerry Austin, were married. In 2006, they moved to St. Michael to help with the family businesses, Austin’s Alaska Adventures and St. Michael Fuel. Since 2008, Louie has been the manager of both businesses. He had heard mushing stories from his father-in-law and in 2006 began mushing and thinking about running the Iditarod and so started his own kennel. Since then he’s run a number of races including the Paul Johnson, Kusko 300, and Norton Sound Portage. He and Jerrine have five children: Travis Olin, 21, Shaylene Huntington, 20, Hailey Ambrose, 11, Mathias Ambrose, 8, and Caleb Ambrose, 6. Louie says his hobbies are hunting, fishing and snow machining. He will be running the 2013 Iditarod in memory of the late Jerry Austin.