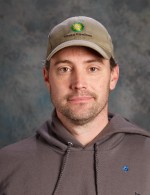 John Dixon, 40, was born and raised in Garland, Texas. Growing up in Texas, he enjoyed hunting and fishing and always dreamed of living in Alaska. He moved to Fairbanks in 1995 to attend UAF and received his B.S. from there in Wildlife Biology. He has worked the last seven years as an operations supervisor for BP on the slope. “I’m ready to come back and race the Iditarod again after a 14 year break. I have continued to train and breed sled dogs since my rookie year in 2000 while I have also been raising a family and building a career with BP Alaska on the North Slope. I want to get back on the trail because I feel like the dogs are ready and so am I. So with a lot of help and support from my family and friends, we hope to have a successful return to the Iditarod.” John and Lisa are the parents of Justin, 24, John Jr. 15, Jessica, 9, and Jack, 6. John says he enjoys spending time with his wife, raising his family and hunting, fishing and rafting.