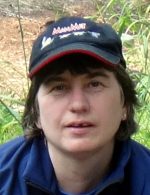 Misha Wiljes, 49, was born and raised in Prague the capital city of the Czech Republic, a beautiful and ancient city in the heart of Europe. After attending trade school in graphic design, she worked as a sign writer, and several years as a painter for movies, TV advertisements and billboards. She has always loved to travel. Her spare time was spent hiking and exploring with her dog and a backpack. While sleeping under the star’s blanket, she developed the desire to explore other country sides. She has traveled extensively in Australia and the Yukon Territory, finally coming to rest in Alaska, making it her permanent home in 2003. Naturalized in 2009, she now holds USA and Czech citizenship. She began mushing in 2000 and learned about it while handling for Charlie Boulding, Vern Halter and Judy Currier. After several mid distance races, she completed the 2012 Yukon Quest and the 2017 Iditarod. The 2018 Iditarod is her next challenge and it is a goal she has firmly in her mind. Together with her husband, Gerhard, she built WW Kennel in Willow, Alaska, and now lives her dream while running with her own dogs in distance races like the CB 300, the Yukon Quest and the Iditarod. She has worked for the post office in Willow for the last two years. She says she enjoys fishing and sewing.