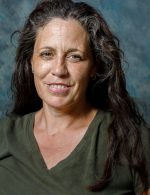 Karin, 49, was born and raised in Mt. Baldy, California. She left home after high school, skied for a year and then went to college. She received her BA in Environment from Colorado University and lived in Colorado and Idaho before coming to Alaska. “I saw my first sled dog in March of 2002, when I came up to volunteer for the Iditarod. By 2003, I had sold everything I owned, quit my job and moved to Alaska to become a handler. After two years as a handler, I tried to quit my dog habit. That didn’t last long—I was miserable without dogs! I started building my own team in 2006. I really never expected to do any racing, much less run the Iditarod! I am not too sure how it all happened, but just two years later, I found myself signed up for my first Iditarod. 2020 will be my 9th Iditarod. I was hit by a truck while training in 2014. Luckily all my dogs were OK, but I broke my back in three places. It has been a real challenge to work through the pain and loss of function, but I was not ready to quit doing what I love – running dogs in the amazing wilderness of Alaska. I was able to complete Iditarod again in 2016 and 2017. After a few years off from racing I’m ready to tackle the trail again. I am one of a very few mushers to work full-time through the winter. My biggest challenge is trying to fit training and racing around the demands of my job. It is just this side of impossible to get everything done, but somehow I make it happen.”