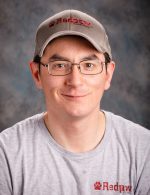 Most Improved Musher — Sponsored by Matson